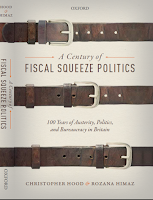 Recently published: A Century of Fiscal Squeeze Politics: 100 Years of Austerity, Politics and Bureaucracy in Britain, with Rozana Himaz. Published at a time when 'austerity' is seldom out of the news, this book identifies and compares all the main efforts to cut public spending and/or raise taxes in the UK from 1900 to 2015. The analysis is both quantitative and qualitative and it reveals some patterns that have not been explained or even recognized in earlier works on retrenchment and austerity. For example it identifies a long-term shift from a 'surgery without anaesthetics' approach to fiscal squeeze (deep but short-lived squeeze episodes) in the earlier parts of the period towards  'boiling frogs' approach in more recent decades (episodes in which the pain is spread out of a longer period).

Also Published (in 2015): A Government that Worked Better and Cost Less?: Evaluating Three Decades of Reform and Change in UK Central Government, with Ruth Dixon. This book evaluates what happened to the performance of UK over a 35 year period by showing what happened to running costs and to various measures of citizen satisfaction with government administration. You can read more about the book here and about the themes of the book in Governance. You can read a review by Tom Thatcher of Finsbury here. This book won the 2015 Louis Brownlow award from the United States National Academy of Public Administration for best book in public administration and the 2016 W.J.M. Mackenzie prize from the UK Political Studies Association for best book in political science published in 2015

Christopher Hood specializes in the study of executive government, regulation and public-sector reform. Recent projects have included work on long term changes in UK central government administration over 35 years (funded by the Leverhulme Trust) and on the politics of fiscal squeeze (funded by the ESRC). Details of those projects can be found on the website Reshaping Executive Government. He is currently working together with the Institute of Fiscal Studies and colleagues at the Blavatnik School of Government on a three year study funded by the Nuffield Foundation and the ESRC on the development of public expenditure control in the UK from the early 1990s to the mid-2010s, and due to be completed in 2020. You can read a brief account of the study here


Christopher is a Fellow of the the British Academy, the Academy of the Social Sciences and the National Academy of Public Administration (United States). He is currently visiting Professor, Blavatnik School of Government, Oxford.
He has taught government, public administration and public management on three continents, has authored or edited over twenty books in the field and at least 100 journal articles, and received several awards for his research and publications.

He was Gladstone Professor of Government at the University of Oxford from 2001 to 2014 and Director of the ESRC Research Programme ‘Public Services: Quality, Performance, Delivery’ from 2004 to 2010. He chaired the Nuffield Council on Bioethics Working Party on Medical Profiling and Online Medicine whose report was published in 2010. He served as a member of the UK Government Office of Science Review of the Analytical Capacity of HM Treasury 2012-2013.

Email and telephone: please use the University of Oxford Contact Search.

Posted by Christopher Hood at 11:26